The 2020 Indian Premier League auction takes place on Thursday with a total of 332 cricketers going under the hammer in Kolkata.

There are seven overseas players available at the highest reserve price of INR 2 crore (£211,532), including the Australian quintet of Pat Cummins, Josh Hazlewood, Chris Lynn, Mitchell Marsh and Glenn Maxwell.

South Africa’s Dale Steyn and Sri Lanka’s Angelo Mathews are also in the highest price bracket, while Robin Uthappa is the most expensive Indian player in the auction with a base price of INR 1.5 crore (£158,690).

The Indian Premier League has shared some of the top picks ahead of Thursday’s auction:

And VIVO #IPLAuction is back!

Big names, Big numbers. How will they fare? 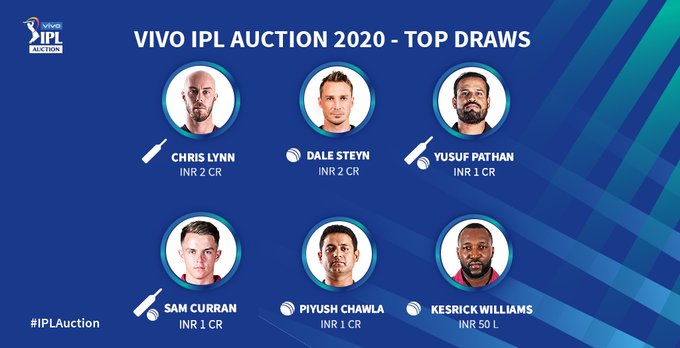 572 people are talking about this

Who amongst these will draw the big bucks at the #IPLAuction?

Let us know your thoughts. 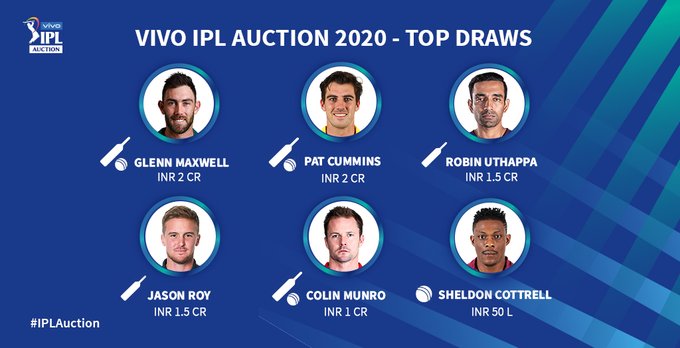 1,052 people are talking about this
Top players such as England’s Tom Banton, Australia’s Aaron Finch and New Zealand’s Jimmy Neesham are also likely to be in demand as are West Indies pair Shimron Hetmyer and Evin Lewis.
The complete list of all 332 players available for the 2020 IPL auction is available here. Thursday’s auction takes place at 3:30 p.m. local time/10 a.m. GMT/5 a.m. ET.

eam Budgets (according to The Cricketer)

Mumbai Indians are the reigning champions and are expected to have a quiet auction as a result. They may only buy back-up options to complement their strong squad.

They have seven slots available but only two are for overseas players, and they also have the smallest budget of all eight teams after retaining the core of their squad in the offseason:

3,556 people are talking about this

Kings XI Punjab are the team with the biggest budget and will likely look to splash the clash. KL Rahul and Chris Gayle are the team’s stars and may be joined by some of the auction’s big names such as Cummins, Neesham or even England’s Jason Roy or Eoin Morgan.

The England skipper played for the team previously in 2017 and being a World-Cup winning captain is likely to attract plenty of interest from franchises in need of a solid middle-order batsman.

Royal Challengers Bangalore are also likely to be busy bringing in players. They have the smallest squad of the eight franchises and a total of 12 slots available, including six overseas places.

The team put a new coaching staff in place in August, which suggests they could take a fresh approach in their bid to win a maiden IPL title:

We are happy to announce Simon Katich as the new Head Coach of Royal Challengers Bangalore. Simon will be in charge of inculcating a high-performance culture within the team. #PlayBold

318 people are talking about this

Thurday’s auction gives all eight teams the chance to build and strengthen their squads ahead of the 13th season of the IPL. The tournament gets under way in 2020 with the first match between Chennai Super Kings and Mumbai Indians on March 23.

Mumbai Indians Will Lift the IPL Trophy for the 5th Time?

Profile Vina Singh - September 20, 2021 0
Pedro Alonso is one of the most loved characters of La Casa de Papel (Money Heist), who is portrayed as Andres "Berlin"...

Juanita Vanoy Ex-Wife of Michael Jordan, Career, and Net Worth

Profile Vina Singh - September 20, 2021 0
Juanita Vanoy a former model of Chicago and executive secretary of the American Bar Association is best known as the ex-wife of...

Profile Vina Singh - September 18, 2021 0
If you have watched La Casa de Papel (Money Heist), then Jaime Lorente is a familiar name for you, portrayed as "Denver."
Newspaper is your news, entertainment, music fashion website. We provide you with the latest breaking news and videos straight from the entertainment industry.
Contact us: [email protected]
© Newspaper WordPress Theme by TagDiv
MORE STORIES

Juanita Vanoy Ex-Wife of Michael Jordan, Career, and Net Worth